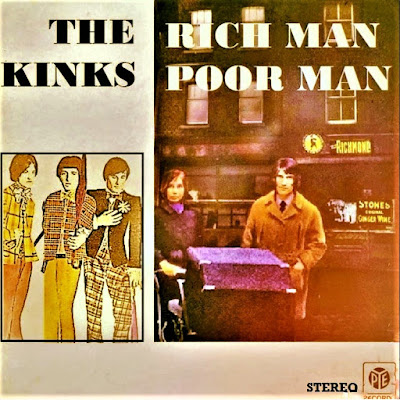 Pop music has a terrible inbuilt weakness of destroying itself through over-familiarity. The constant and cynical repackaging of music served up as random compilations to recoup the investment of record companies, is a particular curse of the industry. Exposed to constant replay, individual songs lose meaning in their contextual association with inappropriate company. In short it loses it's power. Yet when done right, a collection of songs carefully sequenced to aid an overarching theme can occasionally rival good fiction or film. The medium is relentless and in a concentrated 40 minute sitting, there can be fewer more intense artistic experiences to achieve so much whilst demanding so little effort. At it's best it envelops us.

This stereo double album compilation by The Kinks, may or may not have been prepared for foreign territory release in the mid '70s. Either way the oil crisis and copyright problems with the sleeve design sidelined it until this copy with hebrew text on the label surfaced at the end of last year. Had it been widely distributed it would have joined a multitude of other such releases to seemingly milk the band's 60's heyday. Yet look again and you can see it is so much more.

Rich Man Poor Man appears to have had it's source in an original and previously lost all embracing theme that pre-figures the arc of concept albums The Kinks released from the late 60's onwards. The period was marked by relentless touring that took a physical and mental toll on the band. Poor management by upper class chancers with severe cash-flow problems exacerbated the pressure on the band to deliver hit after hit and Ray Davies found his visionary ambitions frustrated with each song either rush-released as a self-serving single, b-side or album filler.

The songs reflect what he was witnessing close at hand. The class inequalities were bursting through the veneer of swinging London and we can clearly see why he would return again and again to the recurring theme of innocents abroad. The Kinks like many other bands were regarded as no more than walking pound signs created to keep a small army of users fed and clothed. As the years passed Davies would become more explict in calling this out, but in 1966-67 this anger was largely supressed behind a facade of elaborate metaphor and satire. I would argue that had this record been released at the time it would have greatly altered our perception of The Kinks and seen them ranked on an equal footing with the progressive long-play output of their Beatle and Beach Boy peers. As such it's a remarkable discovery.

RECORD ONE (36 mins)- a sharp tongued pantomine set to music hall rhythms mocking the rise and fall of old money from school, office and discotheque. The fortunes of the protagonist collapsing through a conspiracy of govt. policy and poor English weather, leaving him adrift from both family and class.

The first side follows the fortunes of a single character, a certain David Watts, "head-boy at the School, ...captain of the team" whose immense

superiority is recounted in detached third person by a narrator we imagine machine-gunning from the School roof in Lindsay Anderson's "If...". "He is so gay and fancy free.." he spits "... and I wish all his money, belonged to ME". But the old money stays with the old money, as made evident in the summer '65 song A Well Respected Man which acts as a touchstone for the whole concept. This was the first song released by The Kinks to reveal the inner sardonic mind of Davies who affects a sneering vocal to the following priceless couplet, "And he plays the stocks and shares and he goes to the Regatta, he adores the girl next door, cause he's dying to get at her". And on this record, as though it was always meant to be, the final strummed chord miraculously segues into the opening strummed chord of an alternate Dedicated Follower of Fashion, breathing new life into Davies great misappropriated anti-swinging London anthem (see my RAY DAVIES-Spring 1966 entry). 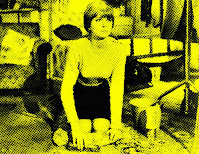 Then amongst the subterranean-set, the drums poundng like an impending coronary, our narrator encounters the cast-off Little Miss Queen of Darkness, a waif like Jane Asher in "Alfie", burnt-out "cause the only boy she had, went and cooly stepped aside"  by... a now far too randy Dandy rampaging across the Mayfair nightlife. Here the underside of the swinging City is laid bare in all it's debauched futility. Our privileged toff dragged over the coals in the accusatory rave-up, House in the Country ,"Well he got his job when drunken Daddy tumbled down the stairs, from that very day this boy has more than had his share." It ends side one with a sense of hubris...for those whom the God's would destroy. And, "One of these days I'm gonna knock him off his throne", sings his old classmate. It's like a promise.

The guitar reverses into Side Two like the beginning of the end because "He went and spent all the money that he had, because he had a heart and not a head”. The net result, his Most Exclusive Residence for Sale. An alternate version of Afternoon Tea follows the downward spiral, switching the narrative to first person. It's references to an absent tea-room tryst under starry skies, signalling a delusional descent in both ambition and libido. 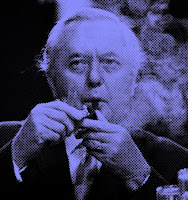 "The taxman's taken all my dough" sums it all up, Sunny Afternoon or not, with his property loss ill-compensated by forced inertia 'neath changeable sunny skies, the future is bleak. Lazy Old Sun is like that chilly moment as we watch the cloud cover the ground before us and we wait for it's inexorable shadow to roll over our spot. The song is a woozy nod to the downer brought on by too much excess whether material, chemical, sunshine or ...booze. An inspired shift back into Pop, the third person Mr Pleasant though arrives like an unwelcome guest. The chirpy upbeat mood clashes with the bleak truths like something out of Dickens. And even Mrs Pleasant has gone. "Wintertime is coming, all the sky is grey, summer birds aren't singing since you went away" closes the End of The Season curtain like an old show tune at the end of a rain-lashed pier. "I just can't mix in all the clubs I know” he moans, “Now Labour's in, I have no place to go". And so part one ends. The swinging snapshot of the Capital city now forced to look into itself.

RECORD TWO (35 mins)- a parallel world on the other side of town under the same grey skies where the stakes are so much higher. Characters break free and fall under the City's wheels, before blissful redemption awakens them to the life-affirming realisation of the wonders they've always had. Even if it's not that much.

Side three opens with studio chat into a short instrumental run-through of Waterloo Sunset that drifts straight into the profound Autumn Almanac. "This is my street and I'm never gonna leave it and I'm always gonna stay here.." sings a proud everyman until the mysterious inner workings of the mind are revealed like an actor's split-second expression, "because the people I meet seem to come from my street and I can't get away... the street is calling me. Come on home!. Hear it calling me, Come on home!".

And Billy Liar is left at the train station as Julie heads off for the streets of gold. The London bells introduce us to the Big Black Smoke and immediately we consider her fate, as told by a bristling stentorian voice, "Well she slept in caffs and coffee bars and bowling alleys and every penny she ha-a-a-d, was spent on purple hearts and cigarettes". The words bowling alleys spat like a blasphemous rebuke from the pulpit. Rosy Won't You Please Come Home follows the lament of her abandoned mother, whilst Too Much on My Mind may be the song of them all. A study in mental anguish where to these people, human choice and happiness are forever at the mercy of chance. But smile, smile, smile as long as you've a lucifer to light your Harry Rag eveything's ok. And at the beginning "Susie and Johnny were happy... earned enough to pay the rent" but these new characters are introduced to bring us back into the circling kitchen sink of it all. It's Davies most Marxist scenario. The Situation Vacant reading like a death notice for Johnny's broken dreams,“Susie’s separated living with her Ma" and "little Mama’s satisfied”. The fourth song on the side to contemplate the happiness or otherwise of a Mother.

Inevitably side Four finds us in Ken Loach territority on the aptly named Dead End Street. A trad jazz coda plays over the fade like a New Orleans funeral parade, before a thunder crash empties the streets with apocalyptic portent. “The reckoning was beckoning, they’re living to their doom, there is no hope, no reasoning, this Rainy Day in June”. And “…everybody felt the rain”. Everybody, Johnny, Joe, Tom and Susie, like Rosy before her, free from Mama again but in the mire. Like a miracle Susannah’s Still Alive, but only because we see her breathing and its all too true that it “Doesn’t matter what she does, she knows that she can’t win”. The hapsichord waltz of the Two Sisters, which Davies wrote about himself and his brother, introduces two more characters to the mix, “Sybilla looked into the mirror, Priscilla looked into the washing machine” but through an unexpected moment of grace (in the maisonette), the mood is transformed, “Priscilla saw her little children and then decided she was better off than the wayward lass that her sister had been”. And that's all it took to return to the beginning and this is my street and This is Where I Belong. It's a blissful mini anthem of hope and it seems to circle back to Record One and the "house upon a hill" character, now "with no place to go". And at the end of it all we are made to understand that the bright London lights shine with illusion and as they recede back into the darkness, a glorious Waterloo Sunset lights up Terry and our Julie, who we leave to their life of simple pleasures. 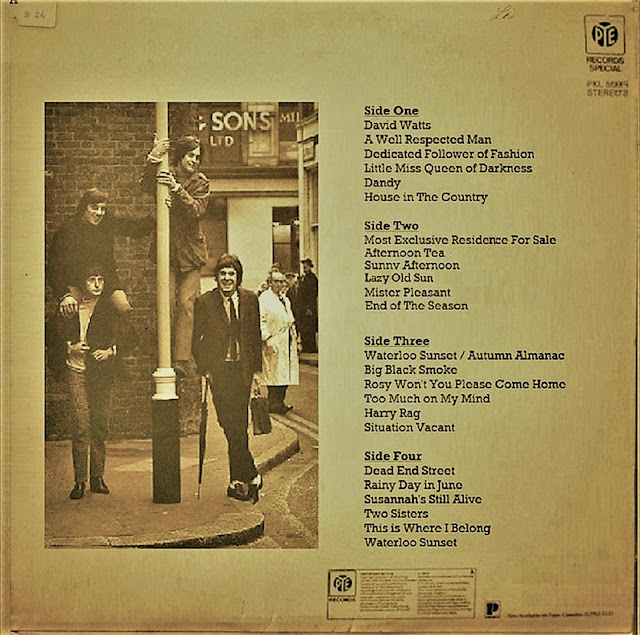 On reflection the whole thing is a synthesis of the 60's cinematic working class dream, re-channelled by a writer in the thick of it. It's tuneful, simplistic and at times quite moving. It also breathes new life into songs you thought you knew. Try and track down a copy (or make your own). It's a great enveloping listen.