In the first film, a disorientated man becomes entangled in a web of murder and vice, in the second a lonely woman drifts through time and space towards a recurring nightmare. The films are by the little known Luigi Bazzoni and they capture the essence of giallo.

Italian for yellow, the term giallo came to signify the mystery genre in Italy due to the popularity of the yellow-spined novels that appeared from the 1930's onwards. The likes of Agatha Christie, Raymond Chandler and even Edgar Allen Poe, all found a home between the garish covers printed on cheap paper ubiquitously sold in garages and newsagents the length and breadth of the Italian peninsula. After the war the term encompassed the full range of imported crime films, taking in film-noir through Hitchcock to the German krimi productions of the Edgar Wallace mysteries. As the 1960's progressed, elements of the French fantastique genre mixing comic book, horror and sci-fi were added to the mix, which by the end of the decade resulted in a complete re-marketing of the giallo-product. 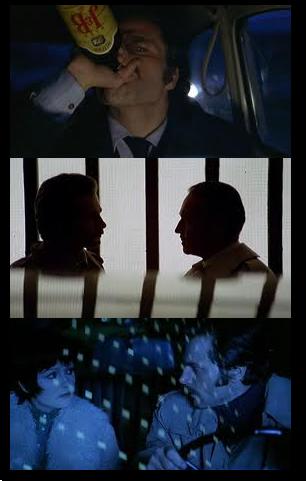 The commercial success of Dario Argento's iconic 1969 film, "The Bird with the Crystal Plummage" set the template for this new breed of stylistic thriller with worthy contributions soon following from the likes of  Mario Bava, Luciano Ercoli and Lucio Fulci. "The Bird With the Crystal Plummage" not only set the template for the look and the plotting but also the bizarre zoophilia in film titles that became a requisite selling point until the mid-1970's. "The Black Belly of the Tarantula", "Lizard with a Woman's Skin", "The Cat O' Nine Tails" and "The Case of The Scorpion's Tale" would all follow, culminating in Fulci's ill-fittingly titled masterpiece "Don't Torture a Duckling". In this context Luigi Bazzoni's 1971 entry "The Fifth Cord" at least merited an alter-ego based on its Italian title as "The Black Day of the Ram".

The film is a memorable addition to the genre containing many of the core iconic requisites. The sad-eyed Franco Nero plays the hero implicated in the mysterious crimes, unravelling the complex plot through a depressive whisky hangover. (The ubiqutious product-placement of the J&B label on show in this film is a recurring giallo within giallo.) The black gloved killer pursues his victims from a point of view perspective and there is a de rigour subplot in which morally corrupt older men exploit young people, mirroring the generational conflicts in contemporary Italian society. The stylish camera-work and lighting, working in tandem with the immaculate Ennio Morricone score, raise the overall product above a plot which like so many giallos twists and turns around a fairly preposterous motive for the actual murders. Indeed the whole genre, more accurately labelled thrilling all'italiana, is an abject lesson in Italian style over essence. Even when the blood comes it's bathed in chic profundo rosso. 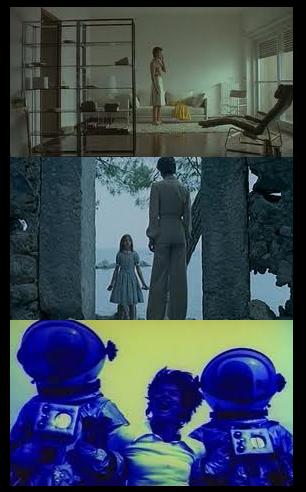 That said, this is not to denigrate "The Fifth Cord" or the genre itself as mere vacuous exercises in style. These films were made to look good and 40 years on their immaculate "look" remain an integral and inescapable part of the viewing experience. In 1974's "Footprints", when Brazillian actress Florinda Bolkan walks from her ultra-modern office, framed by a towering block of steel and glass, we go "wow!" because she is a beautiful woman giving meaning to the modernist architecture of the surroundings. The giallo offers us an alternative universe in which the concrete visions of Le Corbusier and Oscar Niemayer cast 70's Italian cities as modernist utopias. The characters exist in surroundings torn straight out of Sunday colour magazines with their style complimenting the narrative as fully as the shadow photography of Film Noir or the horses charging through the Monument Valley Western.

Adding futurist landscapes to a story that loosely plays with Science Fiction gives the mystery at the heart of "Footprints" a profundity somewhat deeper than the average giallo. As a result the film stays to haunt the audience long after the end credits, inspiring repeated viewings.


We wonder what planet Bolkan's character Alice is actually on when she visits the out of season resort of Garma. The mosques tell us she is in Turkey but it is never mentioned. The mysterious Garma is a strange place somewhere in the subconscious. This Alice in wonderland is drawn to the resort through an instinctive feeling that it holds the key to an understanding of her loss of memory and her recurring sedative-enhanced nightmares. Where in "The Fifth Cord" the mood is dark and oppressive with distorted camera angles mirroring the disorientating decadence of narcotics, "Footprints" takes place in clear Mediterranean light. Where the mysteries of the former film are hidden in shadows, Alice's fears are to be found within a fracturing mind, straining like her eyes in the bright sunlight of the day. It's an unsettling contrast.


The popularity of the genre ensured that the more lurid traits of giallo found expression in a number of lesser works that either cranked up the grand guignol horror or provided exposure to a cavalcade of European lovelies. (The work of Edwige Fenech springs to mind in the latter category). Many of these films maintain the high production values, but the routine nature of their contrived plot-construction leave them largely forgettable. It is a brave man indeed who sets upon the task of consuming the 200-plus films made within this period that feature some elements of the iconography. But dip into giallo with this double-bill of Bazzoni films and you might be pleasantly surprised with what you find.