PETE TOWNSHEND - 1968: A year between the cracks 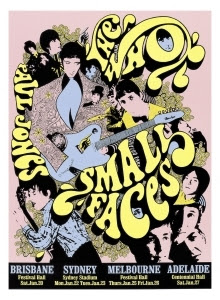 It's worth quoting in full:

"They're the scruffiest bunch of Poms that ever milked money from this country's kids...they took nearly 8000 teenagers for $2.60 to $3.60 each. All the kids got for their money was an ear-splitting cacophony that was neither musical nor funny...They did more to harm the British image in a few days than Harold Wilson or Edward Heath could do in ten years. I'm ashamed to have come from the same country as these unwashed, foul-mouthed, booze swilling no-hopers. Britain can have them"

And so ended The Who's tour of the Antipodes; a two week slalom of long-haul flights, harassed air hostesses, rotten P.A's and lots of tinned beer. Two years on they'd be touring opera houses for the crowned heads of Europe, riding high on the back of a critically acclaimed magnum opus that would make them millionaires.

The December 1967 release of the remarkable post-modern masterpiece "The Who Sell Out" turned out to be a dead-end. In fact it happened in Pete Townshend's head when the taster single "I Can See For Miles" failed to sell. "I spat on the British record buyer" is the oft-quoted remark that draws a line under this period. Townshend had leapt forward as far as anyone could in bringing the audio-visual concepts of management to fruition, but the lack of commercial success compounded some significant inner turmoil. The summer had taken its toll with the guitarist personally scarred by a number of nightmarish mid-flight incidents whilst touring the States. After their performance at Monterey he tripped badly all the way home on his first and last experience with STP, whilst an emergency landing on a foam covered runway at Rhode Island would flashback in an unexpected direction.


At the start of the New Year the band put down a rag-bag selection of songs destined for a motley sequence of releases over the course of the next 40-odd years. The uncharacteristically sober, "Faith in Something Bigger" hinted at the post-acid comedown that had lead Townshend towards spiritual rejuvenation in Indian guru Meher Baba. At the same time a more explicit expression of his self-reflection was to be found in the dramatic "Glow Girl"; a fiery re-incarnation horror story complete with a pop-art plane-crash guitar solo no less. The guitarist was edging towards something here. Some sort of statement. The rejected promo artwork is a classic of the time pop-collage, with Sitting Bull, Henry Kissinger and Tor Johnson from "Plan 9 From Outer Space", all heading towards their maker.

Back home in his studio in Belgravia, Pete demoed a song rooted  in the English winter. "Melancholia" would erupt into life in the hands of the band later on in the year, but in the author's original recording we hear a crazed scientist pottering about in his lab. The home-made drums and treated vocals lurch against the anarchic tempo like neurones bouncing across a traumatised cerebral cortex. This was the sound of a straining lurch into the abyss. It's bloody good but Townshend clearly didn't  know where HIS band were heading.

Studio time in L.A squeezed between an inter-state Spring tour produced "Call Me Lightning", a remarkable throwback to an earlier Who (a return to a lost Who?). "Little Billy" was no less interesting and confusing, commissioned as it was by the American Cancer Society. On stage at the Fillmore East in April Townshend explained it as;

"A song about someone that doesn't smoke and doesn't die of obesity, even though he is very fat - and ends up looking after all the children of the people that died of cancer" 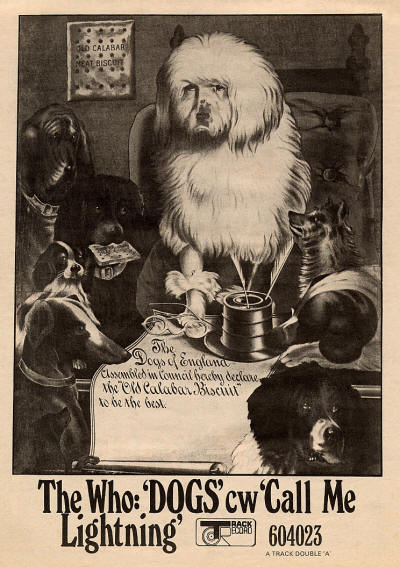 At the same concert the band delivered a blistering extended version of "Relax" from "The Who Sell Out" whilst "Shakin' All Over" and "My Generation" formed a blueprint for the improvised soloing that would become the band's hallmark in the years to come. Recorded a day after the assassination of Martin Luther King, Townshend marked the occasion by replacing his usual conclusion of "You are forgiven" at the end of  "A Quick One" with a mind-numbingly inappropriate throwaway that encapsulated the band's wild sense of naivity and exhuberance abroad:

Back home in the midst of a tour of University Hall's, the humour was restored to a somewhat more benign if bizarre tone when the band decided to issue a calculated if ill-fated stab at the charts. In retrospect the release of running mates The Small Faces' "Lazy Sunday" in April was perhaps not coincidental in the decision to let loose "Dogs" with all it's cockney ooh-la-la. The Track Records promotional material did little to help it sell but today we can but glory in the song's sheer mind numbing irreverence. And listen to those harmonies at the end!


Back in a variety of studios the band continued to accumulate songs. At Track headquarters in Soho, manager Kit Lambert was intent on collecting these sods and odds into an LP intended for a July release to coincide with the Wimbledon tennis tournament. Exactly why "Who's For Tennis?" would have been an appropriate move based as it was on a very lame title joke has been lost in time. However it reveals the dire straits the band were in and firmly explains where The Who were in the rock firmament. If it had been released it would have been a fittingly perverse addition to the band's recent career moves, that it wasn't released, marks the point where the band's fortunes were irrevocably altered. 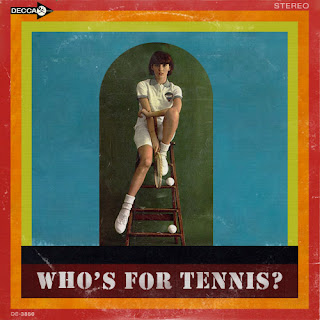 As the Summer of '68 slipped into Autumn, Pete found himself focussing on something altogether more substantial and with Lambert egging him on, the band began work on a batch of new songs assembling under the working title of "The Deaf, Dumb and Blind Boy". Unbeknown to them, the sessions at IBC, Portland Place would occupy the better part of the next 8 months.

To bridge the gap, the band resurrected the Bo Diddley-inspired "Magic Bus", a non-performing US-only single which in sound resurrected another echo of the lost Who. In fact so low down was this piece in Townshend's ambitions, he'd given the song away 12 months previously to a hopelessly obscure act appropriately called The Pudding. Their version flopped too.

On the 7th October (the day of this scribe's birth no less), the band flew to Bremen to publicise the song on the German "Top of The Pops", "Beat Club". But in a clear sign that management had lost track of their target audience, the Track promotional machine cranked up with wildly misplaced overkill. 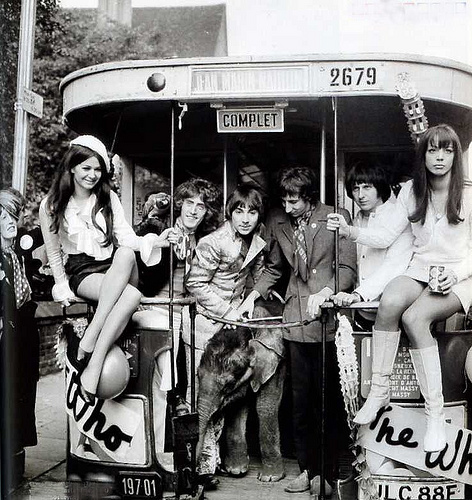 What was it about this song? In America the song had titled an outrageous rip-off of an LP called "Magic Bus: The Who on Tour". Released to look like a live album the record was in fact a dodgy compilation of b-sides and singles. The band raged against it's release yet there they were on the 9th October aboard a vintage bus which followed a circular route from Shepherd's Bus to Holborn via Oxford Street and Trafalgar Square. On board were a baby elephant, a parrot and two dolly birds who would go onto infamy later on that month when they posed nude for the Track Records-Dave King designed, "Electric Ladyland" sleeve. A week later the whole lot of 'em repeated the same journey!

In November the band joined a package tour across the provinces which climaxed in a performance at the Empire Theatre, Liverpool where the audience were treated to an eight man super-group of Who and Small Faces. For the latter group there would be only another month before their implosion and though it had seemed inevitable for Townshend's bemused charges, The Who MkII were actually about to crank it up to full throttle.

In December they appeared in a TV studio in Wembley as members of the The Rolling Stones "Rock'n'Roll Circus" extravaganza. Designed to triumph where the Beatles '67 "Magical Mystery Tour" had merely baffled, the whole thing eventually collapsed when the Stones forgot to bring the house down. In the re-issued film bleary-eyed punters dressed like extras from "The Prisoner" make desperate efforts to whip themselves into a frenzy as Mick and the boys finally hit the stage. But Wembley at 6am in the morning is a cruel place to be and there is nothing more painful than watching a band perform their set AT their audience. The Stones were approaching their creative peak but they hadn't got under the skin of their material yet, and compared to the other acts they simply didn't seem hungry enough.

But none of them were hungrier than The Who and this performance above all demonstrates the strides the band had made on stage by the relentless touring that year. One legend persists that Jagger (or manager Allen Klein) attempted to sell the whole thing back to the band as "The Who's Rock'n'Roll Circus". Whatever the truth, posterity records that suddenly the bass boomed like never before, the vocals swaggered with greater conviction, the drums rolled like exploding grenades and Pete slashed at his guitar with almost devotional violence.