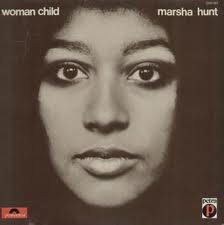 By her own admission, Marsha Hunt was maybe not the most technically accomplished of the many female vocalists to make their mark in the 1960's and on occasion she seemed to overcompensate for inappropriate material by singing in the style of someone trying very hard to get noticed. This collection of songs covering sessions from 1969-1971 is a hotch-potch of bluesy show tunes, swamp rock, Dylan, The Band, Traffic and a brace of songs by the fledgling Marc Bolan. Sometimes she's backed by strings, jazz musicians, rock stars and sometimes it sounds like its a bit of everything.


But like Hunt herself, the whole package gels as a sum of its parts, pulling you back again and again for repeated listens. Whether it's her unpredictable vocals, the ambitious range of material or the top-notch backing, the whole thing seems to work!

What was she anyway? A singer, an actress, a model, a dancer... a groupie? In fact she was all these things. The timeless story of a young ambitious "face" propelling herself into whatever the people with money and influence wanted her to be.

Whatever it was Marsha Hunt ensured she was part of it!

Her route to fame was legendary. From a mid-60's Berkeley hanging out with Jerry Rubin, to the London blues scene in the company of Alexis Korner, John Mayall and Long John Baldry. She then auditioned for an unimaginable Soft Machine line-up, gaining UK residency and a husband through a marriage of convenience to keyboardist Mike Ratledge. From a minor role in the major musical "Hair", her exuberant kinky afro soon ended up on all the promo posters and album sleeves and modelling contracts with Lord Litchfield and Horace Ove soon followed.

Suddenly everyone wanted a piece of Marsha Hunt. The Stones wanted her in the publicity photos promoting their "Honky Tonk Woman" single which she turned down, but by November 1970 she'd given birth to Jagger's daughter and their union immortalised in the Stones iconic "Brown Sugar".  In this period she also appeared in the rock-Othello theatre production "Catch My Soul" and added glamour to the Chelsea-set Hammer horror film "Dracula 1972" (AKA "Dracula Chases the Mini-Girls"). She topped this playing The Nurse at the Rainbow Theatre, Finsbury Park in a symphonic "Tommy" appearing in an admittedly b-team (though eclectic) line-up of David Essex, Elkie Brooks, Vivian Stanshall, Roy Wood, Jon Pertwee and...Bill Oddie.


Amongst all this in 1969, she picked up a track from Dr John's "Gris Gris" album and unleashed an inspired "Walk on Gilded Splinters" on a quite unprepared British public. The Marie Laveau voodoo bit and the impact of her provocative couture, ended up jamming the BBC switchboards long into the night. Future Yes-man Rick Wakeman contributed the keyboards, but it's the sinister cor anglais obligato that pushes this song beyond the boundaries and into somewhere very dark. The full BBC clip has gone down I'm afraid but you get this:

The flip of the single, a trilled flutes and funky bombast version of Marc Bolan's "Red Hot Poppa" was just as good and the package paved the way for the release of a double Bolan-penned follow-up single "Desdemona / Hippy Gumbo". When originally recorded in 1967, Bolan's band Johns Children imploded in the aftershock of a BBC ban which effectively decapitated their chances of achieving any lasting fame. That the ban was a result of the following lyric says much about the rapid speed of change in those late 60's: 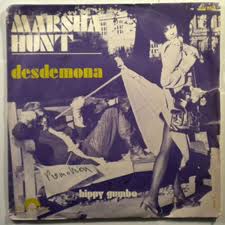 Slowed down into a funky groove, Marsha lives the lyric, crafting the definitive interpretation to the extent that it could have been written for her alone. Of particular note is the superb choir of fellow yank exiles Madeleine Bell, Nanette Workman and Doris Troy. They would appear on multiple records in this period, including The Stones "Let it Bleed" and their backing vocals add a sweet counterpoint to Marsha's exuberant wailing. When their soul chorus merges halfway through with the string arrangement, "Desdemona" is propelled high indeed. Great piano too!

The Bolan connection came about through producer Tony Visconti, another displaced American carving a niche for himself in a vibrant London scene. Working on Tyrannosaurus Rex's "Unicorn" LP at Trident Studios in Soho he introduced the pair and as he memorably recorded:

"you could see the shafts of light pouring out of their eyes into each other...We finished the session unusually early and Marc and Marsha walked out into the night"

Hunt and Bolan clicked and in addition to composer royalties the diminutive one hung around long enough to add memorable backing vocals to a dramatic cover of The Supremes "My World is Empty Without You". His un-restrained ejaculations add a haunting presence to an already edgy inversion of the Motown template. Visconti's sweeping strings go even further turning this into something akin to an Anglo-American "Je T'aime Moi Non Plus"!


Other songs of note include the spooky title track "Woman Child" and the old-time jazz excursion "Moan You Moaners" cut with a visiting Count Basie Orchestra. The LP was recorded on Track Records with label boss Kit Lambert overseeing production of a couple of songs and in-house genius Pete Townshend adding the flesh to a rolling version of "Long Black Veil". Its also The Who-man's distinctive guitar runs that slash through an admittedly ragged "Wild Thing" finale, recorded in the company of Ron Wood, Kenney Jones and Ian McLaglen of The Faces.

To these ears the Simon and Garfunkel song is a mistake and there is a very unflattering YouTube clip of a pregnant Marsha BLARING this out to an absolutely bored Italian TV audience. The pre and post song interviews are particularly painful with her hair-style occupying the most coherent question and with arms folded she strains to hide her irritation. Track down the 1972 Italian TV performance instead with her frugging away on oversized building bricks with a Roman version of the Young Generation. For a moment she looks like she is going to be very big indeed. 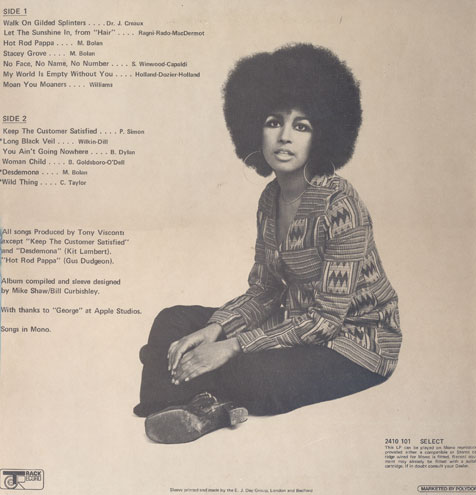 It is a flawed LP (and it is after all a compilation) but the great moments are many and when it hits its stride the overall sound works wonders. There's a great deal of care given to the arrangements and the ensemble playing is consistently impressive in both the thrashing rock and the moody ballads. Once again we're reminded of how much talent was around at the time and these recordings sound like the collaborative effort of friends as opposed to rivals. There were plenty of egos on show but it doesn't come across.

One final request - go back to the top and really blast out "Hot Rod Poppa". And when you've done it can someone please tell me who the hell is playing that guitar?
Posted by Mat Schofield at 13:44 3 comments: