After a brief break I return with some further reflections on that period before the mid-1980's when the drums sounded good and Oldham market really was somewhere you wanted to go to.

To kick-start this re-vamp I have invited some disparate colleagues to contribute reviews of albums selected on rotation. One an academic who excels as a painter (CG), one an administrator who excels as a guitarist (PS) and one a sort of time-travelling gypsy who excels at... that. (JS). I've no idea where this will go but I am curious to see.


Starting out as The VIPP's, a tough Carlisle blues-rock band, they moved to London on the back of some success in France and via notorious producer and scenester Guy Stevens, suddenly found themsleves wandering around Soho in hipsters and bells under (and in) the name of Art. 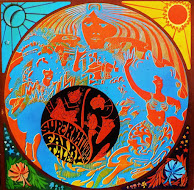 Their lone album exists as one of the more muscular entries in the small but fabled canon of recordings that emerged from the capital in '67. The psychedelic sleeve by snappily titled designers Haphash & the Coloured Coat lead them to appear as the Heavy Metal Kids on the counter-culture jam session credited to Haphash & the Coloured Coat with the Human Host. Along the way they effectively discovered Joe Cocker, let Keith Emerson slip through their ranks and almost became Jimi Hendrix' Experience being the first band he sat in with on his arrival in the UK. With the patronage of Chris Blackwell and the entry of American Gary Wright they settled as Spooky Tooth. Their first album in 1968 being a fine addition to the progressive rock emerging from Island at the time complementing the albums of that year by the likes of Free, Jethro Tull and particularly Traffic. Music mid point where the psychedelic influences were waining in favour of a return to rootsy rock and blue-eyed soul. 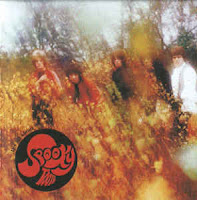 Leaning on contemporay singer-song writer material from the States the band built up a reputation for sizzling live shows that showcased their increasingly tight musicianship. Another off-shoot came with their rip-it up jam behind Nirvana on that band's final and atypical Island 45 in 1969. In this year they headed up to Willesden (like many of us do) and the Olympic studios-rival Morgan (now a cut-price chemists) with Traffic producer Jimmy Miller. Here they recorded "Spooky Two", arguably their most cohesive collection but one (like their career) marred with some poor decision-making. For example the opening song "Waiting For the Wind" is something of a false start. The brooding build-up drumming and tension suggest something memorable but the whole mood collapses with a horrible transition into a monolithic riff that strangles the song's melody. Great albums don't start like this. Things pick-up a bit with the follow-up songs; one Traffic-like-lite, one gospelly/Stones and finally the momentum builds to a nailed-on classic performance in "Evil Woman". When frantic guitarist Luther Grosvenor finally explodes halfway in you're well and trully ready for it ...and does he explode!

Side two starts slowly again but gets better with  the tracks flowing well through a range of styles, The gentle harmonica intro of "That Was Only Yesterday" launches the band into a rolling laid-back groove which contrasts nicely with the hard rock "Better by You" that follows.But like all good shows this takes you to the end on a high with the outstanding folky-rock of "Hangman Hang My Shell On A Tree". Producer Jimmy Miller was also re-making the Stones at this time and you can maybe hear echoes of "Salt of the Earth" here with the simplistic anthem-like melody ringing on after the LP's finished. The mysterious lyric blending with the (British) Island Records obsession with pastoral strumming.  Traffic probably picked this up when they set about their "John Barleycorn" opus. So in conclusion "S2" is a fine lost album and should be better known. Post-script - after this the bassist left to form Humble Pie - arguably the sort of band Spooky should have become. The remaining members then foolishly attempted a collaboration with a French electronic classical music composer. The resulting plinky- plonks were distracting, the religous lyrics wearisome but the band were in fine form and some claim it very good. But it's an album that's slipped so far between the cracks that this scribe just can't seem to reach it.

I wonder if 1969 hadn't been such a stellar year for British rock and roll, would this album have had more of a positive response from the British public? As it was, this kind of ended up lurking in the shadows of Abbey Road, Let it Bleed, Led Zep I & II, Tommy, 2525 (Exordium and Terminus)... OK, not that last one.

Maybe Gary Wright's falsetto vocals were seen as gimmicky and off-putting; maybe the rushed (and largely unwanted) release of the wretched Ceremony later that year killed off any credibility that this might've accumulated. Whatever the reason, Spooky Two certainly deserved more recognition than it received and it remains for me a hidden gem in Island's eclectic and largely excellent catalogue.

There are straight out guitar/organ rockers such as the opener Waiting for the Wind with its funky extended drum intro; the melodramatic Better By You, Better Than Me which was included on the Nice Enough To Eat Island sampler; and the sleazy-riffed Evil Woman which is timeless enough to have been used in TV adverts for a betting website, 50 years after its release. 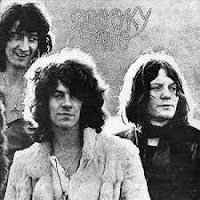 Elsewhere, the LP takes different turns wherever you look: Lost in My Dream alternates between suppressed tension and spaced out prog fantasy; That Was Only Yesterday has a lilting country feel, complete with wistful harmonica motif; Feelin' Bad sounds like the hangover the day after Traffic's Feelin' Alright, but when you know the night before was worth it; I've Got Enough Heartaches is in danger of sounding a touch schmaltzy at first, until the beautiful gospel vocals come in to make it something Joe Cocker would’ve been happy fronting up; Hangman Hang My Shell on a Tree fades out to close the LP with a bit of everything thrown in for good measure.

Maybe Spooky Two didn’t have enough going for it to be considered among the best LPs of the year, but considering the competition that’s hardly surprising. It certainly didn’t deserve to be overlooked quite as much as it has.


(JS)
On first impression Spooky Two( 1969) by Spooky Tooth is an album which has promise, but fails to create the next step of the culture it aspires to. The tightness of the band's rhythm and blues heritage is softened by rich organ swells. The double vocal blend of Wright and Harrison is occasionally swelled by female gospel voices. The rhthym’s are loose and the guitar work is softer, but falling short of the psychedelic jangle that typifies this period. The record hovers is a middle space between, not quite rock, not quite prog, not quite psych, and its reluctance to commit to easy categorisation confuses the listener seeking brand identity. The musicianship on display here is pleasant to hear, skilful to behold, but not sufficiently focussed to create sufficient memorable impression.
Overall a band comfortable with the prior zeitgeist, making unconvincing, tentative steps to explore a new age and a new sound. "Lost in my dream" is probably the bravest track, but "Better by you", or "I’ve got enough heartache" is probably what the band plays best.

(CG)
The second album released by Spooky Tooth in 1969, Spooky Two, in many ways reflects the achievements of the British contemporary rock scene in 1969 after a seminal period in which various genres of rock and roll, R and B, and the blues had been mined to develop a predominantly guitar orientated music in the UK which expanded beyond the radio shaped formats of the 3 or 4 minute song. 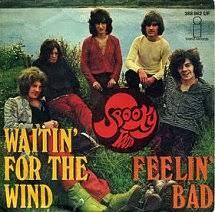 This paralleled similar developments in rock music in the United States which also provided some impetus into the British rock scene but also highlighted differences of approach. Although not received particularly enthusiastically at the time its track listing highlights many of the directions that rock music was to develop in the seventies and eighties. These ranged from progressive rock to sultry blues derived wailers such as Evil Woman to heavy metal pounders such as Better by You Better than Me subsequently covered by the heavy metal band Judas Priest in 1978. It also included lyrical musings of Hangman Hang my Shell on a Tree that linked to the folk scene and folk rock emerging at this time with its distinctively British take on such fusions that drew on vernacular local histories found within Britain and Ireland. In short this is an underestimated album that has hidden appeal as with its diversity at least one or two tracks will score a hit with the listener whatever their musical preferences.
Posted by Mat Schofield at 15:52 No comments: