ROBIN GIBB - Saved by The Bell 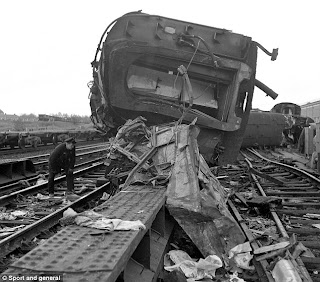 Fifth of November 1967, the Hastings to London train, from it's tracks...was driven.

In his control box the Hither Green signal guard reported the wheels as burning white hot. The impact sent the 17 year old Robin Gibb, dressed in mac and trilby, head-first from his seat into the overhead luggage rack. His 19 year old girlfriend clutched her mother's bread pudding for dear life as rails smashed through the window, inches away from her head. Before long there were 53 dead passengers scattered across the tracks and 78 severely injured, many receiving on the spot amputations. Face black with oil, Gibb assisted the survivors including a small boy who screamed "The driver's dead! The driver's dead!". Not long after, Gibb entered a period of sustained post-traumatic shock. Already a sensitive child, brother Barry opined, "he was never the same again".

Robin Gibb's AMBITIOUS title track to the 1968 double album "Odessa" would be the culmination of the Bee Gee's intense synthesis of the late 1960's music scene. Like an immensely gifted ocean cruise band, the brothers whipped their way through Beatlesque pop, blue-eyed soul and sweeping ballads, even dipping their toes into voguish swamp rock and country and western sounds. It was all here. Arranger Bill Shepherd was given free reign to articulate their grandiose visions and the pudding was predictably over-egged with the inclusion of instrumental tracks representing each brother. Robin's "The British Opera" closed proceedings in a suitably epic fashion prefiguring his little heard massed strings and choir "Moon Anthem", recorded in tribute to Apollo11. In the pressing plant, the unique red flock cover of "Odessa" forced a rash to break out on the assembly line, but within the family more significant problems were breaking out. 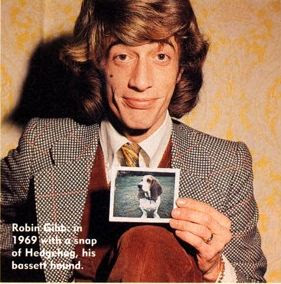 In an atmosphere of rising egotistical tensions which were seemingly orchestrated by management, Robin left the band to venture out into a wilderness of legal writs and bad blood. Amongst statements confirming his admiration for Charles Dickens, talk of a film about Henry VIIIth and a brace of anachronistically jingoistic comments about Empire, he embarked on a series of nocturnal recordings at the IBC studies in Portland Place. His single "Saved By The Bell" followed the established formula of emotional balladry entwined in quavering falsetto harmony and strings, but the sessions also utilised a primitive drum machine and a plinking plonking moog synthesiser. At nearly 13 minutes the sweeping  "Hudson's Fallen Wind", was like a dark cousin to the Beach Boys "Smile", recounting as it did the chaos and disaster inflicted on a Mid-West farmer in the storm season. Gibb's verse concerning the screams of cattle lost to the maelstrom of a typhoon seemed to bring to mind his own recent traumas.

The resulting album "Robin's Reign", would feature only a fragment of this track, with the running order dedicated to his slightly troubling ballads. The mood was dark and strange with songs that evoked another age. "I get the feeling I was born in the wrong century" he would quip to reporters, glossing over a lyrical content not only influenced by Victoriana but one seemingly contemplating the sacrifice of The Great War. Another lost track , "Alexandria Good Time", which was considered as a possible b-side, sets Winston Churchill's "History of the English Speaking Peoples" to a dirge-like funeral procession. "Gone Gone Gone" was one of many meditations on loss whilst the LP closer "Most of My Life" repeats the same words over and over:

"Most of my life I had to run away
Life was a game and I just had to play
The friends that I thought I had, were never there
You look for love, but you don't know where" 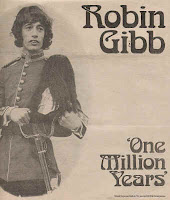 Other intriguing songs remain as mere titles. If we can hazard a guess about the subject matter of "My Love Life Expired", one can only wonder about what was going on in "The Band Will Meet Mr Justice" and "The People's Public Poke"?

A solo concert in New Zealand resulted in a memorable performance of "Massachusetts" with a tomato hitting him at the start of the song and a girl pushing him into the on-stage orchestra at the end! Back in London he complained to the press of living in poverty in his big house in stockbroker belt Virginia Water, fuelling accusations of exploitation by his 22 year old wife (the girl with the bread pudding). This period resulted in Gibb having the ignominy of being made a Ward of Court by his concerned father. (Hugh Gibb was also tellingly the Bee Gees business manager). The solo path was proving a strange place to be. This clip gives a flavour:
The recordings continued into 1970 and if anything Gibb was becoming increasingly avant-garde. The songs from this period have been widely bootlegged but this doesn't make them the any easier to compehend. The mood is austere with an anguished sub-text that even brings to mind the distinctly alien feel of Nico's harmonium-accompanied recordings. Scott Walker would certainly have been the life and soul of the party compared to this stuff! The lyrics are deeply mournful and seem to sketch out a possible war-time story-line. The overall atmosphere is actually enhanced by the rough bootlegged quality, as though it was pressed on scratchy early-20th Century shellac. This gives it the convincing sound of music made in another age, an accident that Duchamp and the other cut and paste surrealists would certainly have approved of ! The actual recordings are a marked improvement on the previous album's almost low-fi sound with more cohesive arrangements that in their ambition quote such diverse sources as Gustav Holst, Richard Strauss and "Big Country" composer Jerome Moross. But for the most part it is simple orchestration, harpischord and Robin's multi-tracked vocals, quavering over moody doom-filled lyrics. The LP was rumoured to have been titled "Sing Slowly Sisters" after the following song and it gives a good representation of the sound:


NB: This stuff has now come out in pristine quality. Get hold of it!!

By the summer of 1970 Robin was back in the fold and the brothers Gibb were once more The Bee Gees. In interviews his relief at being returned to the fold was palpable and his statements dismissing his solo work sound like the words of a young man chastised for staying out all night. He was now back at the table and the band continued where they left off. This 1971-72 period resulted in albums that contain a wealth of unfairly neglected material and both "To Whom it Might Concern" and "Trafalgar" demand re-appraisal. In the latter you can hear a band making up for lost time with the album concept a probable hangover from Robin's history fix. The inside sleeve of the gate-fold features Barry as Admiral Nelson with Robin leaning over him as Hardy. Tellingly father Hugh looms over the pair keeping a watchful eye on his combative child prodigy's.

The 1969 break-up would prove to be an aberration in a career which would go from strength to strength. They would conquer America, establish themselves in the international pop firmament and tan wildly. Whether the stuff they knocked out from the mid 70's was any good is far beyond this humble scribe's remit. But I can certainly confirm that the under performing records from their crisis years and the stuff left mouldering in cardboard boxes in Marylebone recording studios, is very good and demands pulling out.