MINA - The Tiger of Cremona

Mina Mazzini was an Italian singer responsible for one of the greatest pop-melodramas ever recorded. In her rise to stardom she encountered many obstacles and the bitter lessons learnt ultimately lead her to a life of self-imposed exile. 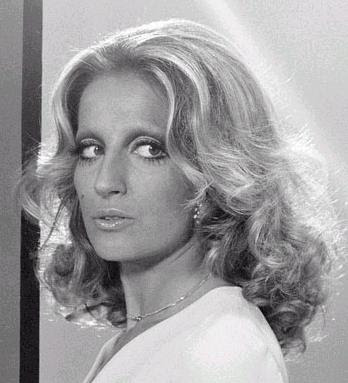 By the early 1960's the former rock'n'roll Queen of the Screamers was beginning to experience the downside of her provocative stardom. The exuberant repertoire of her early songs reflected the usual teenage obsessions but they also reflected the deeper repressed vitality of life within a highly conservative society.

As a nation-state Italy is not unique in it's ability to dupe the masses with democracy, whilst an elite minority oversees a process that siphons off the nation's wealth. In Italy however this process is re-inforced by the alliance of Church and State which dictates a strong moral justification for the preservation of this status quo. Mina almost single handedly invented the pop-singer in Italian society through her immense popular appeal to the proletarian masses of both the working class north and the impoverished agrarian south. The hypocrisy of Italian society is however so entrenched that once she overstepped the moral code in her personal life, the recording industry whose pockets she lined, felt compelled to join as one in an attempt to sacrifice her.

Mina found herself banned from the the state controlled RAI public broadcasting company due to a scandal caused by her relationship with a married actor and the pregnancy that followed. New recordings and TV appearances were suppressed and after the death of her brother in a car accident, her withdrawal from public life was complete. The authorities however found it hard to maintain censure of a figure of such genuine popular appeal and unsurprisingly the ban was lifted despite renewed efforts from the RAI to maintain standards. Commercial considerations ultimately dictated how far morality could be pushed and the Italian public democratically voted Mina back with their lira. An image-conscious but impotent Vatican looked on, as Mina returned back to the charts, stronger than ever. It is interesting to gauge just how much damage had been inflicted on society by Mina's moral weakness by the haste with which the world of commerce would embrace her triumphant return. Indeed a contract with the Batolli pasta company would soon prove a lucrative arrangement for all concerned.

This period would also mark the beginning of an artistically rich period with her highly melodramatic multi-octave vocals given free reign over material edging into uncharted taboo areas. Here is a pregnant Mina back on the TV demonstrably proving that "one kiss is not enough" :


Songs became dedicated to a liberalising agenda glorifying the pleasures of sex and the similarly outrageous act of smoking as in "Ta-ra-ta-ta (Fumo Blu)" (Blue Fumes). Pushing things further she covered Wilson Simonal's Brazilian samba "Nem Vem Que Nao Tem" which toyed with sex and religion with it's references to the devil (Tellingly the song would be camped up by Brigitte Bardot as "Tu Veux Ou Tu Veux Pas" a couple of years later). A run of memorable songs would follow culminating in a moment of genuine creative genius that would transcend the lower-brow nature of this thing dismissed as "pop-music". In 1966 the collaboration with composer Ennio Morricone would result in the phenomenal and deeply moving "Se Telefonando" (If Over The Phone). Famously inspired by the sound of police sirens, the song eschews Anglo-Saxon pop-song conventions with a unique repeating crescendo of choruses mirroring the rising emotional intensity of the song's protagonist. The song is a revolutionary experiment in pop and arguably un-equalled by anything recorded in Britain or the USA at the time. In this song we have to concede that verses are irrelevant when the chorus is this immense:


Mina was now the iconic symbol of assertive Italian womanhood. She'd ridden the wave and crashed but was now back, firmly in control of her own destiny. In this period she married and embarked on very public affairs with actors Walter Chiari and rising star Gian-Maria Volonte, then making a name for himself in the Morricone-scored westerns of Sergio Leone. By 1969 she had entered the third phase of her career mixing bossa-nova and easy listening songs to reflect the upwardly mobile direction of a maturing fan-base then enjoying a relative boom in living standards. Blues and soul work-outs featured in her repertoire and her sound mirrored the influence of singers like Dionne Warwick and Dusty Springfield. At 5ft 10" Mina cut an imposing figure. At the start of her career she'd been dubbed The Tiger of Cremona and she was now emulating that image with her shaved eyebrows and heavily made-up eyes glaring through a mane of long golden dyed hair. The 1970 song "Viva Lei" (Hurray For You) was a virtual manifesto of what she was now all about with it's depiction of a woman breaking free from chains she didn't need. One wonders if this is a song about a relationship or whether it's actually about Italy itself. The song certainly starts with a look that says "Don't mess with me!" and the smile at the end screams "F##k you!". It's mid period Mina at her very best:


The "Insieme/Viva Lei" single marked the tipping point where the Tiger of Cremona transcended her role as a record industry sex-object to become THE diva of Italian pop music. It also marked her 30th year. 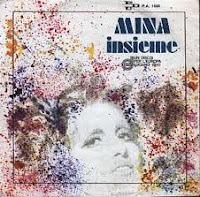 The success of the record set the template for her future career and ushered in a productive collaboration with songwriters Lucio Battisti and Mogol. (Mogol had penned the original which as "I Who Have Nothing" would become a standard for Sinatra and Matt Monroe amongst others). She now had greater control over her albums and recorded in Lugano, her Swiss home since the mid-60s exile, she was now geographically and symbolically just beyond the control of the Milanese record industry. Each year an album would appear following the same formula, highlighted by European hits like "Grande Grande Grande", a song covered by fellow-diva Shirley Bassey as "Never, Never, Never". One of her best albums 1972's "Cinquemilaquantre" would feature "Parole Parole", an almost comical duet with Alberto Lupo, where the singer mocks her suitor, degrading his fawning confessions of love as mere words, words, words. It would become a much-parodied song and it's popularity would lead to a similar duet in France between Dalida and Alain Delon. 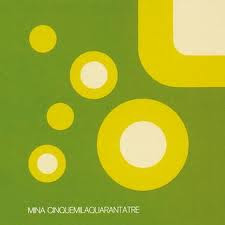 In the mid 70's like Bobbie Gentry in the USA, Mina would commence her retreat from the public eye making her final TV appearance in 1974. In 1978 she performed an emotional and final concert performance at the Bussola Nightclub in Tuscany. She continued to record and to this this day releases at least one new LP a year to a fan-base bolstered by a new generation taking advantage of the availability of iconic 60's and 70's recordings.

It might be said that she compromised her sound in the 70's through the adoption of the prevalent mid-Atlantic trends of the day and it is certainly true that the work is more formulaic than some of the truly innovative records that she made in the mid-60's. However there is much to admire in her 70's output and Italian pop music in general enjoyed something of a renaissance in this period with the rise of other female singers like Patty Parvo, Milva and Ornella Vanoni.

Ultimately however the musical legacy of Mina is constantly referred back to that collaboration with Morricone. A recent poll in "La Repubblica" voted the song as Mina's finest achievement. It is intriguing to consider that in theory the pair could get together and do this live in concert....
Posted by Mat Schofield at 00:57